Evaluation of the General Government Budget Proposal for 2023-2025

Main conclusions from the evaluation of the GGB proposal for 2021-2023:

The draft general government budget for 2023 to 2025 was submitted by the government amid Russia’s military aggression against Ukraine and the energy crisis, the negative impacts of which are reflected in a significant deterioration of both the macroeconomic and fiscal development outlook. The resulting long-term burden on public finances is estimated at as much as 0.7% of GDP. Without the funding from EU funds, the Slovak economy would not grow next year at all. Due to the war, the economy will be underperforming, while the risk of being hit by a recession next year has increased considerably.

The draft 2023-2025 general government budget is the first budget proposal presented after the entry into force of the legislation that has introduced expenditure ceilings as a fiscal rule. The expenditure ceilings are a key budgetary tool to achieve the long-term sustainability of public finances and was supposed to apply for the first time to the 2023-2025 general government budget. The current draft budget was not prepared in compliance with the expenditure ceilings since the Ministry of Finance and the CBR have still not agreed on the final methodology[1] for calculating, updating and evaluating compliance with the ceilings. Therefore, the Council could not calculate the ceilings and submit them to the parliament for discussion as required under the General Government Budgetary Rules Act.

Assessing the fiscal policy is also important in view of the projected amount of the 2022 gross debt exceeding the highest sanction bracket and termination of the two-year exemption on the application of sanctions under the third, fourth and fifth sanction bracket for the new government on 5 May 2023[2]. The government has not clarified how it plans to address these sanctions if the 2022 debt proves to be in excess of the fifth sanction bracket. According to the CBR, the existing situation cannot be resolved by solely formally complying with the applicable rules, or by directly circumventing them, but they must be appropriately adjusted through the adoption of the proposed amendment to Act No. 493/2011 on fiscal responsibility, designed to update the debt break mechanism and bring it into compliance with the expenditure ceilings.

Against the general government deficit originally budgeted at the level of 4.9% of GDP in 2021, the government currently estimates the deficit to increase to 5.0% of GDP. For 2023, the budget proposal assumes a year-on-year increase in deficit to 6.4% of GDP. The presented budget expects a gradual decrease in deficit towards the level of 4.1% of GDP by 2025. The government intends to achieve a 3.4% of GDP general government deficit in 2024 and, subsequently, at 2.7% of GDP in 2025[3], but there are currently no measures prepared for those years that would result in meeting these goals.

The draft budget assumes a decrease in gross debt from 62.2% of GDP in 2021 to 59.8% of GDP in 2022 and a subsequent further sharp decline towards a 56.8% of GDP level by the end of 2025, relying on the fulfilment of fiscal objectives that are not supported by any measures. This decline is mainly driven by a high pace of inflation expected in the upcoming period. Irrespective of the discontinuation in debt level growth in 2021, starting from 2020 the debt has been above the upper limits of sanction brackets under the constitutional act and will remain above this limit throughout the forecast period, according to the Ministry of Finance.

The purpose of the CBR’s opinions is to offer an independent view on the budget and assess whether the fiscal policy setup is sufficient in terms of achieving the targets set and, at the same time, to identify potential risks which need to be eliminated through the adoption of additional measures. In line with its mandate, the CBR also assesses whether the current budget creates conditions to ensure the long-term sustainability of public finances and to meet the national fiscal rules. To that end, the CBR wishes to highlight the following key conclusions from its evaluation: 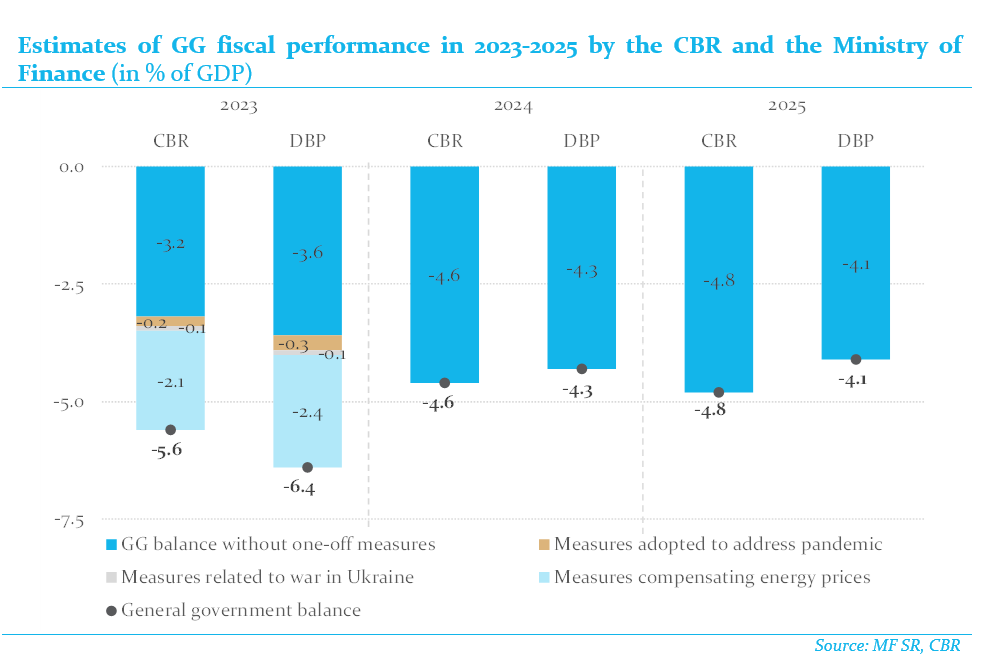 [1]        Despite its repeated requests, the Council has not received any comments on the proposed methodology since the meeting of 14 July 2022.

[2]        After this deadline, the government would be obliged to block 3% of selected government expenditures and immediately ask the parliament for a vote of confidence. At the same time, it should draw up a proposal for a balanced general government budget for 2024, containing no increase in expenditures.

[3]        The draft budget plan presents two objectives for 2024: 1) a balanced budget that formally complies with the applicable sanctions under the constitutional Fiscal Responsibility Act; and 2) a deficit of 3.4% of GDP which, according to the Ministry of Finance, requires structural consolidation by 0.5% of GDP pursuant to the Stability and Growth Pact rules and is more realistic in terms of the necessary size of measures.

[5]     The Ministry of Finance, and/or its Value for Money Unit, currently assess all investment projects of ministries and their organisations exceeding 1 million euros irrespective of the source of their funding. Assessment of smaller projects over 1 million euros was introduced by a government resolution (UV-22129/2020) at the end of 2020 and, compared to large projects, is considerably simplified.